Zacros Xalon is a FanFiction character in Phineas and Ferb. He is supposed to be the long lost biological brother of Ferb Fletcher! He left the family due to the UK recession and has always despised Ferb for seemingly overshadowing him, as he thinks. Strangely enough, he also considers Phineas to be overshadowing Ferb in present day, he finds it ironic...He seems to view himself as greater than other humans in all aspects. His arrogance, pride and view of inferiority of others makes it seem like he considers himself to be a god in some ways. However, these thoughts of his may link to him being somewhat psychotic, which would make sense considering his lonely and painful past.

His mental abilities and flaws are a major part of his character, considering the events which occur in 'The shocking truth' where he explains to Ferb how he 'knows' the truth of life and how messed up it is.

Zacros first appears in the fan-comic two-parter, The mystery of Ferb's bio-bro, as the brother of Ferb Fletcher. He seems to have a hatred for his brother. He also seems to have shape-shifitng powers that he claims to have stolen from a laboratory.In addition, he has shown to be in posession of cloud prisons, which are made of poison meaning a trapped person cannot escape without holding their breath, but the clouds would just follow them and choke them out anyway.

Zacros shows his true from at the start of 'The shocking truth' comic...

In his debut comic appearance, Zacros is shown to be cynical towards the circumstances of life. He especially loathes the nature of humans and human actions and reactions. He labels the human race as 'dumb' and 'inferior' to himself. This could be possibly why he believes he is a god. He may think that he is a god due to his opinion of him being the only non-stupid individual among the life forms on earth.

Zacros, born Terrance Fletcher, was the least favoured of him and Ferb in early childhood. Lawerence and Ferb's mom both preferred Ferb over Zacros, this made him very angry and bitter even to begin with! When the UK recession became too much for the family, combined with over issues such as general taxes and credit card debts, Zacros claims he was kicked out. Or at least, his life qulaity was reduced so bad that he felt like he had to leave.

When Lawerence split up with the mother, him and Ferb both went to America to start new lives. They left many important people behind, but none could ever compare to the memeber of the family they forgotten, Zacros Xalon. Zacros snook on the plane ride to Danville and went off to follow the Fletchers there.

Zacros claims to have lived in the basement of the mummy exhibit in Danville for many years, and lived off the food that the workers of the exhibit left at night. He states he must have been out the day Phineas and Ferb originally came to the mummy basement. (Are you my mummy?) Zacros seems to have spied on Ferb in recent years, as he knows all about Phineas, Candace, Isabella and the other characters despite never interacting with them.

At some point prior to the series, Xalon went to Doofenshmirtz evil incorporated for unexplained purposes. He states in 'Secret sibling shenanigans' that he came across a shape-shifting-inator and he 'accidentally' shot himself with the laser. Ever since then, he has had the ability to transform into other life forms. It is notable to state that Zacros may have been spying on the Flynn-Fletcher's all along as he could have been part of the crowds that have tried out Phineas and Ferb's new inventions, while in disguise as another human. However, this is purely a speculation that has never been confirmed.

His first actual appearance in the Fanon continuity is the Bio-bro comic two-parter. In this story, he captures Phineas and then pretends to be Phineas with his morphing powers. He attempts to get Ferb to build him a slave machine for world domination, but it fails. He turns to plan B, destroying Danville as a giant bug since Ferb won't help him. Phineas escapes, but Candace gets crushed by Zacros in the carnage. At the end of the story, Zacros and Ferb confront eachother in the mummy exhibit and an interaction similar to 'Batman: The killing joke' plays between them with Zacros as the Joker role. In the end, Zacros decides to leave and come back, promising revenge on Ferb, everyone but Ferb forgets about the events of the story due to Zacros' mind control powers. As of the present, no-one knows/has forgotten about Zacros Xalon...

Xalon will reappear in the written Fanfiction story entitled 'Our fun is done!' He is hinted to be aa main or side antagonist in the primary Phineas and Ferb plot. It is unknown what role he will take in this story.

- He can morph into any life form he wants, he can adjust the size from ant size to half the size of earth.

- He has the ability to read minds to an extent, he can tell, or at least predict what someone else in thinking.

- He has the ability to out-wit somebody with his insanity and theories...

- He can teleport from one location to another somehow...

- He has a creative mind, he has good ideas, this makes him Phineas's evil counterpart in some aspects.

- He has basic martial arts training, can engage in combat.

- He can brainwash people via mind games.

- He can generate hazardous rays from his hands...

Zacros Xalon is a character created, owned, and copyrighted by Kosmic Incorporated...

Images are owned by Disney and The creators of Phineas and Ferb: 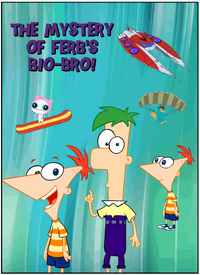 The cover of the comic which first featured this character. 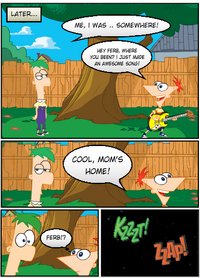 Zacros first appears, disguised as Ferb, and captures Phineas so he can replace his image. 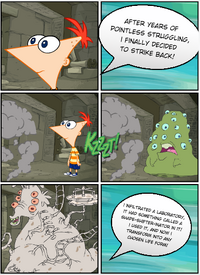 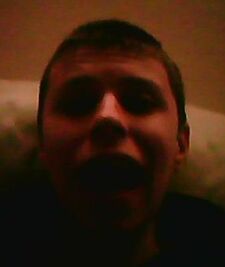 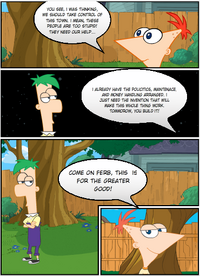 Zacros reveals his plans to Ferb in the 'Secret sibling shenanigans' story. 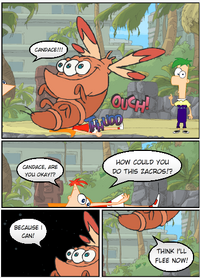 Zacros, as a giant bug, crushes and almost kills Candace! 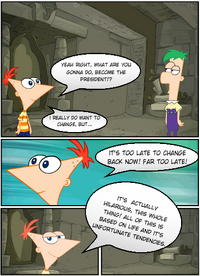 Zacros states it is too late to return to sanity and happiness. 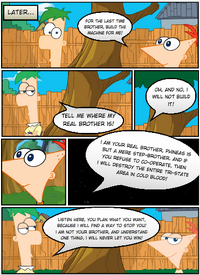 Ferb tells Zacros that he will never let him win.
Add a photo to this gallery
Retrieved from "https://pffanon.fandom.com/wiki/Zacros_Xalon?oldid=210561"
Community content is available under CC-BY-SA unless otherwise noted.