Happy Holidays, people. Merry Thanksgiving, Jolly Christmas, Krazy Kwanzaa, Happy Channuka, Joyous New Year, etc. etc. etc. Being the holiday season, I figure a holiday-related contest is in order. Pick a holiday in the last two months of the year (Nov. & Dec.), and draw a picture and/or write a story about/based on it. The only rules are one entry per category per user (A max. of two entries per user, one story and one picture), and have fun. Yes, having fun is required. If I see your entry and deem it "unfun", you are immediately disqualified. (NOTE: If your entry is disqualified for being too unfun, you may either make it more fun and re-enter, or make an entirely new entry that is more fun. Or you can just forget about it.) Everything must be entered by December 15th. If you win, you get NOTHING. Haha, just kidding. See, there will be five places. First, second, third, fourth, and fifth. However, not two seperate sections for each one. A picture could get first place and a story could get second, who knows? I don't, there aren't any entries as of 11/9.

Fourth place recieves one picture request and a story request (I will write whatever you want me to. Anything.)

First place recieves the above, as well as one request that you just want me to do because you feel like it. It can be anything. I can draw something, write something, make a new rule, block a user, say something, or kill someone... I would prefer if you don't want me to murder someone but meh. I will also slap Gurgy around a bit with some random object next time you join the IRC. You must join the IRC at least once for this prize to be worth it. If you have trouble joining the IRC, type /ns help register and register your nick. Once you have, you may join #phineasandferb. I will not slap Gurgy from #pffanon. People banned from the IRC that have entered will get an exception and I will slap whoever is available in a channel they have joined. In addition to all of this, a story, character, or whatever you want will be put into the menu with other characters/stories/whatevers.

Phineas and Ferb: The Spirit of Christmas by Nan the Cowdog 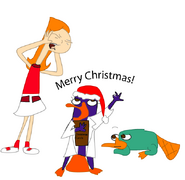 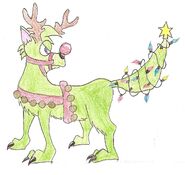 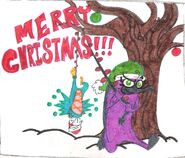 By AlexCat
Add a photo to this gallery

Fifth place goes to "Perry the Red-Nosed Reindeer", a picture by Isabella Fanatic.

This image wins fifth place only because it's predictable and has a lack of... feeling. It just feels like they drew an exact copy of the stock image of pet-mode Perry and made him look like Rudolph. There's no... emotion in it. I like the concept though, so I'll draw you whatever you want. Request in the comments.

This image wins fourth place because Perry and Iantha look kind of off-model. It's fine, though, because Lotta can pass it off as her style :P

I like the concept of a character being terrible at singing. So terrible, in fact, that others cover their ears in disgust when they sing. It always gets a chuckle out of me. Perry just has a confused look on his face, leading me to believe that he can't hear right now and is wondering why Iantha is opening her mouth and Candace is covering her ears in disgust. It's the only digital image that was entered, I like digitally colored images. You, also put your request in the comments for a picture and a story.

Third place goes to "Christmas WereFerb", an image by Maddyfae.

Wait wait wait... she left... how am I supposed to give her her prize...? Anyway, this image bears quite a resemblance to the fifth place image... hmmm... Either way, I like it. Maddy's a pretty good artist, this shows her talent well. You get two pictures and a story... request in the comm-- you left... I'll talk to you on deviantart about it I guess...

Did anyone really expect a Fossy image not to get somewhere on the top three? Everybody likes Fossy. And for good reason. She's incredibly nice (a bit TOO nice if you ask me...), and a pretty good artist. This shows her talent well, even though I used that same wording to describe Maddy. Elf is a great movie, I watched it last week. I love Christmas movies :D. This was a great scene, and based on Jessy's character, I definitely see her doing something like this. Definitely. I'm too lazy to type the prize so scroll up. You know where to request.

Here it is. What we've all been waiting for... drumroll please. (RIMSHOT) I SAID DRUMROLL NOT RIMSHOT! Eh... First place goes to the creatively titled "Image (20) by Ferbluver! YAAAAAAY! </kermit>

. It's drawn very well. I assume I'd love the expression on Perry's face if I could see it... but I can't. However, the expression on the back of his head is hilarious. Somehow. I like the green Santa hat. It's much different from the norm, which I love. While Ferbluver can get annoying when she supports TDR... I honestly like her art. See above and comment below!