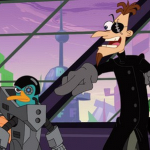 aka P.t.S. or Platyborg

The name's PlatyborgstoShadowlytes, P.t.S. for short.

My favorite character is Perry the Platyborg

I'm probably not going to be posting any of my fanfic stories on this site; I'm also registered on fanfiction.net and my username is ThePro-LifeCatholic. My stories will be found under cartoons: Phineas and Ferb

When I see a piece of blank paper: "Possabilities. . ."

I have written several stories so far on Fanfiction.net, my most famous one so far being Wanted: Dead or Destroyed, which is a story based on how I think the 2nd Dimension came to be.

Shippings I like, and those I despise (We all knew this was coming, right?)

OK, I have decided to list the certain shippings that I enjoy, the ones that are OK (ok!), and the ones that I would never read about or see pictures of. Now, without further ado. . . .Shippings!

Kirla (my own shipping between Kayla and you-know-who)

Lindance (OC shipping, this time between Linda Flynn and my version of her real husband, Vance Flynn)

Elissamerb (a shipping done by my youger sister for Ferb and an OC of hers, Melissa. Yes, she wrote the shipping name in Ferb Latin)

Stacybert (I think I'm going to have this shipping in Wanted: Dead or Destroyed)

Femily (It's in the OK {ok!} list mostly because I don't know that much about it)

Iverry (shipping between Ivy the platypus, another OC of mine, and Perry)

Phinsuzy (this shipping of Phineas Flynn and Suzy Johnson was the main point in a short story that I did with my sister one day. As long as it's only a temporary thing, without them really getting married and all that, then I'm fine with it.)

PhineaFerb (I've seen stories and pictures for this, not on this wikia, though)

Pairings for Kayla other than Irving

Userboxes that I (P.t.S.) have made

Retrieved from "https://pffanon.fandom.com/wiki/User:PlatyborgstoShadowlytes?oldid=265678"
Community content is available under CC-BY-SA unless otherwise noted.