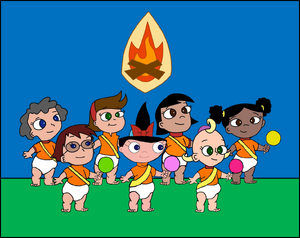 The Fireside Babies is a group of Fireside Girls who turned into babies caused by Doofenshmirtz's Babe-Inator. The members are formed by Candace Flynn (when she's almost like being a nanny) with the baby leader is Isabella Garcia-Shapiro along with her other Fireside Babies crew.

Norm just started cleaned Doofenshmirtz's inators then plugs the Babe-inator and hits first on Isabella and Katie along with Candace's mom and later hits on Milly, Gretchen and Ginger Hirano thus being turned all six people into babies. They we're all crying, except Phineas and Ferb, so Candace calls Adyson and Holly to see their Fireside crew cires. So Candace lets go of Baby Phineas and Baby Ferb, Baby Phineas went to Baby Isabella and he hugs and played with her to stop crying and Baby Ferb brought toys for the other Fireside Babies and they were all happy. Then Adyson holds the baby of Candace's mom and tell the other Fireside Girls (Nicole Duran, Anna Brown and Melissa) to keep the baby shower going. Perry went to Doof's building to self-destruct the Babe-Inator and first hits on the 3 Fireside Girls at the baby shower and last hitted on Adyson, Holly and Baby Linda, in the Flynn-Fletcher's house, which caused Adyson & Holly turned into babies and Linda runs back to her regular age. Nicole, Anna and Melissa have turned ino babies and they were taking care by Dr. Hirano and takes them to Stacy's house. All of the Fireside Girls are now all into babies and they need to keep doing their duties but they are small enough to do so, Candace has to formed Stacy too name the group as "The Fireside Babies" to help them keep doing in their lives just like when they were Fireside Girls and Candace assists 3 of Phineas' friends (Buford, Baljeet and Irving) to babysit her brothers so that soon they'll build a machine that can grow them and the girls to their regular age (while Candace's mom is on vacation for 4 months) and she picks Stacy to be her assistant for taking care of them, especially her sister. Unfortunately Jc couldn't help because he fainted due to his friends as babies and he thinks that they're adorable but he soon helped out.

Babies working as The Fireside Babies

Candace was so confused that the babies of the Fireside Girls are building a bed ford for all of them and she's so proud of them so she called Eliza M. Feyersied that she saw they are now babies while do their built of their bed ford for Candace's assitants and she declared the group as "Fireside Babies" were they assign in the same position for the members. The babies did a successful job on their duties like in their original selves, Buford was taking them to park to have fun with their nanny and Candace lets them take care of them in her house alongside babysit her brothers by their friends. At night, the babies were all asleep and tell them a bedtime story before they go sleep.

The found of other 3 members who turned into babies

Stacy knew that her mom got taking care by 3 babies, and she knew they were Fireside Girls too, so she ask her mom to keep the babies for Candace and she takes them to the Fireside Girls Annex to have a special care for Irving and ask if he made 3 extra beds for the other 3 Fireside Babies in the Flynn-Fletcher's house and the members are now 10. Irving built a van with remote controller and has seats for the babies whenever they go on a adventure and they keep getting badges for their goals in achievement.

In the battle of the Toad Army

Doofenshmirtz, Perry, Dakota, Cavendish, Home Guy and Teenage Buford went to their dimension and Home Guy knew that they're adorable and later Captain Grimes has arrive and they ran away. Later, when Doof build a modified version of his Other-Dimension-inator the portal of their dimension is opened and the babies were joining in the battle with their robot armor, they were team-up with the Danger Force and their 2nd dimension versions of themselves. At the ending, the babies were hugged by the heroes who saved their world from evil and they will be come back soon. Home Guy later give a giant teddy bear so they would go to sleep whenever it's around.

On a Big Adventure

The babies have always do their fun things while playing in their clubhouse and Candace received an message from the future by Home Guy, as he went to their dimension and give babies some stuffs for babies from the future and he gave a map to Candace and he explained that babies need more toys so he stated to her that she'll take the babies on a big adventure to find more toys that they need. So, he leaves and left an mobile virtual presence device of himself controlling the robot for guiding Candace and the rest of the babies for a mission, as well as he gave an small airplane (that can automatically turned large with a remote) and a remote key. The babies have been seated on the van and Candace takes them on a trip to find more toys.

Baby Ginger
Add a photo to this gallery

They were helping, as well the 3 of Phineas' friends were babysit him and Ferb, when they still planning to build a machine that they could turn back all of them in their regular age.

They do the same thing as when they are Fireside Girls, an attentive, hardworking group of people. Generally seen to be caring, helpful, and they are babysit by their nanny-in-law and their assistants.

Since they all turned into babies, their patches are lost but Adyson made dupicates in case of losses. Since they were babies, they earned patches on their stamp frame.

Retrieved from "https://pffanon.fandom.com/wiki/The_Fireside_Babies?oldid=311085"
Community content is available under CC-BY-SA unless otherwise noted.