Phineas and Ferb Fanon
Register
Don't have an account?
Sign In
in: Characters, Teens, Females,
and 19 more

This page is for Stacy Hirano from ANYBODY'S viewpoint!
If you are looking for a full article from our canon counter part, click here.

Candace is Stacy's friend for life. Stacy is known for listening to Candace's ramblings and obsessions. Jeremy (her boyfriend) and her two brothers being the best example. The ginger teen has also roped the Asian into her schemes on many occasions.

Coltrane is one of her love interests.

In this fanfic by WhoCares132 and PhineasnFerb, Candace tells her she is "just plain dull" and Phineas and Ferb sabotage her clothing.

In this Total Drama Island like crossover, she will make an appearance.

She will appear in a live action/computer generated version of the cartoon and movie and sequel and will be played by singer and new actress Charice Pempengco.

She is also the main character in Spin-Off Series.

She's a major character in this series. It is revealed that Ginger from the Fireside Girls is her little sister in season 1.

Stacy was doing just fine. She only received votes from Ferb and Wendy so Candace would go crazy. She was eliminated in German vs. Wild when she threw a pair of shoes to distract a bear but later they turned out to be Chris's and they cost $500. Infuriated, Chris saves Candace and eliminates Stacy, without a parachute, but she survives since Candace gave Stacy hers.

The Adventures of Irving and Friends

She becomes Albert's girlfriend in episode 10, as well as more of a major character.

She is a part of Phineas's team. Her powers are Freeze Breath and Telekenisis.

Stacy hasn't appeared much. The teen is friends with Caelan; she is also racing with Candace in the Amazing Race and Phineas & Ferb crossover.

Stacy is a protagonist in the fanfic. She befriends the legendary Pokemon Landorus three years after Doofenshmirtz becomes the emperor of Danville thanks to Darkrai and Zekrom.

She studies in the college with Candace, she is studying Japanese Translator, while Candace is too doing translator but, she hasn't chosen which options take in 2nd of career; She falls in love very often and has had three boyfriends: Coltrane, Chad and Double 0-0.

Stacy is the main character in this spin-off that follows Stacy and her longtime best friend Candace Flynn as they graduate high school, move into their own place, and begin college at Danville Community College. As Stacy navigates her way through her crazy new life she has been recruited by Carl the Intern to be a Secret Teen agent in his secret organization made up of teens much like the O.W.C.A was all animals.

Stacy places a support role in the series, and she's the only other person (Aside from the members of Xros Heart and Sonic and his friends) who knows about Phineas and Ferb's adventure in the Digital World.

Stacy has always been annoyed with Candace's obsession with Jeremy and busting, and she's always wish Candace would pay more attention to her. But maybe's there's a deeper reason then we thought... Oneshot.

Phineas and Ferb at college

She works in the college as a professor of Japanese and marketing, she has a short relationship with Irving when She felt bad and Irving helped her, they broke up, and told Irving that was because people started saying things about their relationship and that Stacy was turning geeky, the real truth is that they broke up because She wasn't really in love with Irving and she didn't want to keep the lie.

The New Adventures of Phineas & Ferb

She works as an undercover police officer for the Danville Police Department. She also wears numerous disguises to fool the suspects. However, in Cupcakes Part 2, Stacy later retired to help Adam after he got shot and put in a coma by Brendan while saving Phineas, Isabella, Twilight, Spike & Rarity from being shot. Her relationship with other characters remains the same as in the canon show.

Pic of Stacy on Paint

The version of Stacy from an alternate dimension.

Stacy on paint by Tpffan5196 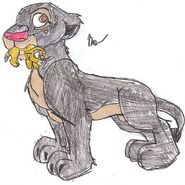 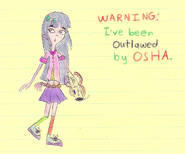 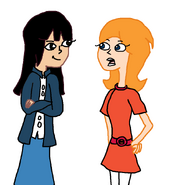 Stacy with Candace as 20 years old. 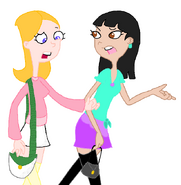 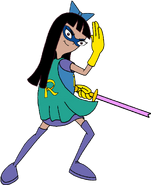 Stacy as Ribbonette
Community content is available under CC-BY-SA unless otherwise noted.