Start a Wiki
Pixie is Cassidy's pet platypus who is also a new member of the O.W.C.A.

Pixie's platyparents weren't expecting a child, so when Pixie was born, it was a great surprise to them and everyone at the animal shelter she lived in. She was put in a small cage without her parents. Pixie lived a miserable life at the shelter, being under-fed and mistreated. She was ecstatic when Cassidy came to adopt her.

Pixie is living happily in Danville with Cassidy. She also goes over to Phineas and Ferb's house to see Perry very often, but he's usually not there. When she can, she follows him to work, where she gets recruited by Major Monogram to be a member of the O.W.C.A. She is currently in training and does not yet have a nemesis.

Pixie looks like Perry, but Pixie is lavender and has eyelashes. The fur on the top of her head is shaggy and tousled, and up in a mohawk-ish fashion. Pixie's feet, tail, and beak are light pink instead of orange. She has a reddish pink heart clip on her head and a necklace with three bubbles on it, similar to the design of Cassidy's shirt.

Cassidy and Pixie are the best of friends and have a relationship similar to Phineas and Perry's. Cassidy tells Pixie all her secrets, and takes her everywhere. Pixie loves Cassidy to pieces and is never mean to her, and vice versa.

Pixie and Perry are good friends. Perry lets Pixie follow him to the O.W.C.A. and is impressed by her skills. Pixie considers Perry her role model and wants to be an agent just like him. They have no romance-relationship yet, but it's possible they will in the future.

Pixie doesn't interact much with Phineas, but Pixie trusts him because he's Perry's owner. Phineas likes Pixie and likes that Perry has a friend to play with.

Pixie doesn't completely trust Ferb because he's so quiet. She thinks he's hiding a big secret from everyone. What Ferb thinks about Pixie is unknown.

Pixie doesn't trust Candace because she's heard stories from Perry and O.W.C.A that Candace mistreats Perry and doesn't like him. Candace thinks Pixie is adorable and way better than Perry because she's a girl and because of her appearance. 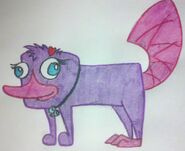 Pixie in pet mode by Ferby!

A drawing of Pixie in agent mode by Ferby.

Pixie by Okamiblossom!
Add a photo to this gallery
Retrieved from "https://pffanon.fandom.com/wiki/Pixie_the_Platypus?oldid=313820"
Community content is available under CC-BY-SA unless otherwise noted.