Patty the Platypus is the pet of Isabella and is the girlfriend of Perry the Platypus. She is a new member of O.W.C.A. (Wanda Acronym's division), although she is only in training (A.I.T.).

Patty hatched out of her egg by herself and alone, due to being abandoned by an unknown mother. Patty was soon found by The Finleys, who raised her for a few years until Mr. Finley got a new job outside of Danville. They soon then had to move away from Danville into an apartment that did not allow pets. Not knowing what do with her, they left her at the Danville Adoption Center.

At the Adoption Center

When at the adoption center Patty had some of the most lonely times of her life. While many pets were there, many left quickly and none of them were ever platypuses. Patty was very sad, lonely and miserable, until one day when the Fireside Girls troop 46321 came to visit. Isabella saw Patty and immediately loved her. She then adopted her, resulting in her getting her "Adopt a Pet" patch.

When Patty met Perry, she began to develop a crush on him, but he left before she actually got to "talk" to him, as he was going on his daily mission. Patty later saw that Pinky left too in the middle of the day. She kept wondering where they went until about a couple weeks after being adopted, she was approached by Admiral Wanda Acronym. Wanda recruited her as an agent and now Patty is an agent in training (A.I.T.), waiting for a nemesis, although she doubts this will happen any time soon.

Patty now lives happily with the Garcia-Shapiros. She is also dating Perry. She is quite glad to have finally found a place to stay, permanently, although she still has a fear of being abandoned. She enjoys being an agent, though she is quite annoyed Wanda has not given her a nemesis yet.

Perry marries Patty and they have a son named Ramen (originally named Peter).

Patty is typically happy, although not always shown by her expression, except when she thinks about the Finleys, or the times during the adoption center. She is slightly shy and has trouble trusting people, due to being abandoned by twice.

Patty looks much like Perry, but is pink and has eyelashes. She has a pink bow on her head and on her hat as an agent. She has a slight resemblance to her owner, Isabella, due to her color and bow.

Patty and Perry first met when Isabella brought Patty over to the Flynn-Fletcher household to introduce her to Phineas and Ferb. Patty developed a crush on Perry, who soon returned these feelings.. They see each other nearly everyday, although both of them must leave on their daily missions.

Patty cares very much for her owner and Isabella completely adores her. Their relationship is slightly similar to Phineas and Perry's.

Since Phineas likes platypuses (platypi, platypeople, whatever you say) he likes Patty very much. Of course, his favorite platypus will always be Perry.

Since Ferb says very little, not much is known about their relationship, but they appear to like each other just fine.

Candace likes Patty more than Perry, since Patty is pink. Patty liked Candace, until she found out about her dislike toward Perry. Since then, Patty has developed a slight dislike towards her. The feeling eventually became mutual.

Patty and Wanda have quite a "boss/employee" relationship. They are not really friends, but respect each other. Patty is a bit annoyed with Wanda because Wanda will not give her a nemesis.

Patty and Pinky get along very well and are great friends. Of course, when you live with each other, hating each one another is not really an option.

"Sorry, Perry's not gonna get a girlfriend. We prefer him as a platypus of mystery, we don't want to know too much about his personal life."

Feel free to add a picture!

Patty in a different style 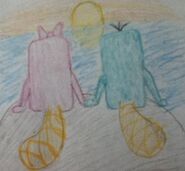 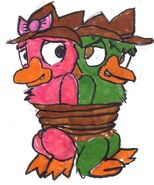 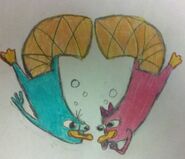 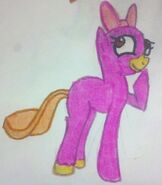 Patty as a pony! (Thanks Ferbluver!)

Note from her creator

Retrieved from "https://pffanon.fandom.com/wiki/Patty_the_Platypus?oldid=314085"
Community content is available under CC-BY-SA unless otherwise noted.