Orchid is a purple platypus that was roaming around the country. She traced her way back to Danville and eventually started doing some missions for O.W.C.A.

Orchid was an abandoned egg in the wilderness of Austrailia, due to her parents being captured by poachers for their pelts. Orchid was an orphan when she hatched, and wandered around, more like stumbled, by herself and alone. A while after she hatched, the O.W.C.A. found her and she was adopted in Danville. After that, she was transferred to a small town in Minnesota due to a bigger evil threat there. When she got a little older, she started to get bored to go on her missions and was tired of being told to do the same thing over and over. She ran away from the O.W.C.A. and reluctantly left her host family.

At the Adoption Center

Orchid was technically too young to remember anything from the Danville Adoption Center, since she was trianed amazingly fast. But it was horrible for the young Orchid. All the other animals made fun of her for her funny appearence. That is how she was hardened into what she is today. The reason she cant swim happened here. One day the animals were let out for excercise, when the little Orchid went up to the, what seemed gigantic to her, water bowl two dogs shoved her in. They were the meanest things to her, they always made fun of her. Because of her awkward stature, a pretty big body with little squatty legs, combined with the fact that she couldnt swim, she almost drowned while she was thrashing about. She doesnt like people to know about this, for fear of making fun of her that she cant swim, so she puts on this persona that is seems tough and not afraid to do anything.

Orchid had already been travelling around the country searching for her original birth place. Once she figured out that she was born in a different country, she found herself in Danville, (by forcing another agent to let her into their lair) wandering the streets, until she saw another platypus running around. Once she found out that he was an agent she was reluctant to continue their friendship. The O.W.C.A. tried to recruit her, but she ran away and hid for days.

Orchid still lives rogue, but she stays in the streets of Danville/The Tri-State Area, even though, Phineas and Ferb constantly try to take her in. She hangs out around their house alot, but sometimes she goes on special missions the O.W.C.A request her to do (some of which are with Perry), but most of them are too difficult or she is too busy to do.

Orchid is usually cold and hard to be friends with because of her past. She'll deny that she's pretty sassy and a little bossy, but if your really good friends with her she is the platy-person you want to tell if you're having a problem that needs dealing with. One of the downsides is she can't swim. She's pretty darn afraid of water, for a semi-aquatic thing, ever since a tragic event that occured when she was in the Adoption Center.

Orchid looks a lot like Perry except she's purple and has eyelashes. She has three longer hairs on her head and the longest one is curly. Rather than having an orange bill, feet, and tail, they are black. Her eyes change from cerulean to green. Also, her bill is pointed at the end.

Orchid and Perry first met when she saw Perry sneaking around for his missions. She was cold and harsh to him, but after a while she loosened up on him and now she just either bosses him around on missions, or teases him when they are off duty. She can still be pretty hard on him, though. They are not in love they are just friends.

Phineas seems to like Orchid alot, he likes to look out the window and see her and Perry standing there in the yard together. He just wishes that she would stay around and live there. He hates thinking that there is a platypus out there without a home.

Orchid seems to prefer Ferb over Phineas, maybe because he's quiet and does what he's told. She also likes his choice of color. So whenever they are resting or watching something, orchid walks over and lays next to Ferb. Ferb seems to like her, but it's hard to tell his emotions.

Candace and Orchid get along fine, but Orchid gets constantly annoyed with her yelling and trying to bust her brothers. Orchid also gets annoyed with Candace because she seems to boss people around, and Orchid likes to be in charge. She sometimes stands in the way of Candace when she's walking, to try and trip her, just for fun.

Orchid is reluctant to go on the special missions that the O.W.C.A. request of her, mainly because of her past with them, but she seems to like it better in Danville, for it is much more exciting. The division leaders refer to her as Agent O, although she hates the name. The name brings back bad memories.

This drawing is a little OOC for her

The first drawing of Orchid in both forms 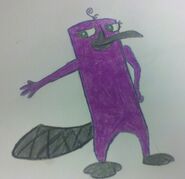 The first picture of her with Green eyes

Orchid when she became an agent

Looks like Orchid hasnt done her pet-mode in a while

Orchid as a pony

This super awesomely unbeleivably cute Orchid was drawn by Pixel (Thanks you SOOO much! ^.^)

The best picture drawn of her EVAR in AgentGoldfish's style. Because he is cool. And the best artist in the history of the universe. 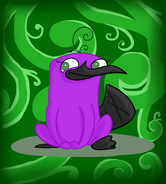 Add a photo to this gallery

This section is for a story that was scrapped a while ago but the first few paragraphs had been written, with working title "An Orchid Blooms", it was going to be about Orchid trying to find her past story because she does not remember anything pre- O.W.C.A.

Perry leaned back in his spiffy red chair. He relaxed as Monogram told him there was nothing to do. Remembering 'ol Doof's last scheme had sent him to the hospital, he had the day off. As Monogram finished, Perry put his feet up and rubbed his head. It was nice to have a day off, he couldn’t remember the last time he had one. Before he left he checked the surveillance cameras. There was a flash of color on one of the screens. He narrowed his eyes and slid his hat back on. Turning off the big screen of , erm, smaller screens, he walked to his big green elevator in the back. As he was riding up the lights shut off and the base was silent.

Orchid strolled into the suburban part of town. This will be the third town she's checked for information, and hey third time's the charm right? She had left her host family for two reasons. Number one, she was tired of being told to do something over and over getting nowhere. And number two, she had always wondered where she was from. Her past was a blur to her, she could only remember back to when she was being trained for the OWCA. The thought of them infuriated her, they’re the ones who plopped her down here in a strange new land, refusing to show her files and history. What were they hiding? Why were they hiding it? No matter, she thought to herself, she was going to find out one way or another. Orchid continued walking against a fence slowly, thinking all these things in her head. She had hear the slightest noise to snap her out of her trance of thoughts and whipped around. She quickly leapt, in attempt of defense to bring down the supposed enemy, at it. There was a whirl of teal as the thing jumped out of her reach, just barely. Orchid stumbled back in surprise. Her jaw dropped in astonishment as she took in what she was seeing. It was another...

Perry got up from where he landed. He had just avoided being tackled from the supposed intruder. He rubbed his head and looked at her. He quickly surveyed her: female platypus, purple body, green eyes, black tail, feet, and bill. Unusual colors for a platypus, what next an albino platypus? He thought to himself. He chuckled but then realized he had been standing there thinking for at least a full minute, he squinted at her, standing there. She looked like she had seen a ghost. He walked up to her, but this seemed to snap her out of the daze, and she jumped back ready to fight. He decided to test her strength considering she hadn’t caught him the first time, with a smirk on his face he lunged at her. Bad idea. She grabbed his fist out of the air and before he knew it, he was on the ground. He frantically waved his arms, motioning he was on her side. Confused, she kept a foot on his chest until he almost started to whimper. Her face changed in realization of something, and a sly smile grew on her face. The purple platypus held out a hand to help him up off the ground. Perry looked from her face, to her hand and took it.

"Gyruru rurururu rururur gyurru." which loosely translates to "I came from a different place." that or "Can I potato place." your best bet is the first option. Perry nodded, she told him she wanted to find where she was born. She told him how she used to be part of an organization, but that she quit the job. Subconsciously she walked with Perry, right into the yard she had been skirting against when she got into town.

"C'mon Ferb! We need to get started on today’s project! That reminds me, where Perry?" a voice came from the open door to the house.

Orchid nearly jumped out of her fur, but Perry didn’t freak out next to her, he simply just lay down on the ground. She gyrururur-ed poking him, frantically trying to figure out what to do. All she could do now was lay down and try to copy the other platypus's expression.

"Oh, hey Ferb! I fou-" cut off from surprise, "Whoa Ferb! Check this!" The boy yelled tip-toeing closer to Orchid. The green-haired one came out of the house carrying some supplies, and immediately dropped them when he saw the other one inching towards her. Ferb ran to where Phineas was and stopped him. Orchid sat there looking up at the two boys. Seeing this as the perfect moment to slip away, she started shimmying towards the gate of the fence. Perry chirped a small short growl. He wanted to get her attention, to stop her from leaving, but apparently it didn’t only catch Orchid's attention. Phineas looked over Ferbs shoulder as Perry and Orchid fell limp again.

"Awww, but Ferb." turning him to face her "Isn’t she the cutest thing you ever did see?" He pleaded using those big eyes of his. Ferb sighed, walked over to Orchid and stood in front of her. She looked up fearing what he might do next. She started shaking as he reached down towards her.

Retrieved from "https://pffanon.fandom.com/wiki/Orchid_the_Ornithorhynchus_(Platypus)?oldid=270442"
Community content is available under CC-BY-SA unless otherwise noted.