Phineas and Ferb Fanon
Register
Don't have an account?
Sign In
Advertisement
in: Characters, Aliens, Males,
and 15 more

Meap is a character from the Phineas and Ferb episode "The Chronicles of Meap" and later "Meapless in Seattle". He is found in many Fanon episodes. He also made a brief appearance in the first Christmas episode.

Meap is featured as a minor character in Celestial Feelings (he takes the USS Phineas at the end to design similar ships for his fleet. He returns the ship and is a semi-major character in The Terran Empire, where he leads his fleet with Phineas Prime against the Terran Empire fleet under General Phineas Flynn from a parallel universe. He is also a semi-major character in A New Star is Born, where he again leads a fleet in battle, but this time, with the help of half of the Terran Empire fleet (this half being traitors to the empire and being friendly with Meap) and the help of alternate Meap (of the Terran Empire universe). In Balance of Terror and Love's Full Blossom, his species is now referred to as "Species 1." He has the honor of signing the TerraFleet Charter on August 23rd, 2022 in Phineas and Ferb: Fresh Out of College.

Meap talks in this episode. He is with Phineas and Ferb.

Meapless in Seattle: The Movie!

Meap appears in this Fanon movie when they go to Seattle with their friends.

The Chronicles of Zim

Meap chases after Invader Zim, as he and his security force are trying to stop the Irkan Empire and put and end to operation impending doom 2. He enlists the help of Phineas, Ferb, and their friends in doing so.

Meap is part of the Alien Division in the O.W.C.A. He is a field agent.

Meap is mentioned and the GPS used to track him is vital to the plot.

He will appear in The List of Secrets as a major character. He helps track Mitch and The Masked Man.

His voice actor is Lorenzo Lamas.

He is an Intergalactic Security Agent.

He and Mitch can only talk with the Universal Mustache Translator.

He is said to be the Candace of the universe because he goes and busts people doing what they aren't supposed to do. In My Boyfriend the Alien Meap is shown to have a romantic attraction to Candace and they got to the dance together and when it was time for Meap to leave Earth he gave Candace a parcel with pictures of their time together.

He knows Phineas fairly well. His spaceship was hit by the baseball Phineas was playing with.

Pretty much the same as Phineas.

He and Perry "talk" to each other (The Chronicles of Meap).

She is his identical twin sister expect with a light pink wave painting on her stomach.

Zim is another one of Meap's greatest enemies.

Meap is good friends with Vanessa and he even helped her in Vanessa's Space Quest. 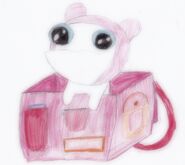 Meap by Cup
Community content is available under CC-BY-SA unless otherwise noted.
Advertisement