This crossover is mostly between Phineas and Ferb, Mass Effect, Futurama and Skylanders.

It was a fine day in the Tri-State Area. It was the start of summer. Phineas Archibald Flynn had an idea to build a roller coaster with is brother Ferb Tyler Fletcher, again. But when they start building it, darkness appears and a wild wind destroys the roller coaster. Phineas and Ferb begin to panic, but then a giant floating head appeared and said, "Citizens of the Tri-State Area, I am Fullmetal Bison and I come in peace, seriously, I come in peace, ironclad constitution.". Then, Dr. Doofenshmirtz fired this Tell-the-truthinator at Bison's giant floating head, then he said "RELEASE THE HYDRA!". The hydra appears and frightens everyone in the Tri-State Area and kidnaps Doofensmirtz. Phineas's friends appear in terror when they enter the Flynn-Fletcher's house, then Phineas hears a ship in the backyard. That ship was called "The Flaming Raptor", the ship was built by Phineas and Ferb, that ship came when a terrible day came to the Tri-State Area. Everyone was warned to get on the Flaming Raptor before it was too late, Bison was angry that they escaped. Then, a message from Major Monogram was given to Phineas that he must recreate the ancient Cahill super solider Nova out of the Eight Elemental Relics.

The engines start up, the Flaming Raptor begins to hover and the Ship Security Gorilla sees what he shouldn't be seeing. "Stop right there, that is an order!" Commander Flynn shouted. "We just wanted to fix it, okay?" Cali said. "Alright, cool." Commander Flynn replied. The Ship Security Gorilla came in to the Flaming Raptor as Flynn and Cali repair the ship. Perry comes out of the ship and finds Ferb and joins the fight against Mega Chompulon (For those of you don't know who Mega Chompulon is, he is a gigantic robot Chompy hired by Fullmetal Bison to slow Commander Flynn down, he was also one of Kaos' generals in Skylanders Battlegrounds). "NO MAN CAN'T ESCAPE ME!"  Mega Chompulon said. "Even if you were original N7 crew!" Commander Flynn fought hard, Mega Chompulon kelp on taunting, but Candace had an idea, "Phineas, do you have some heavy artillery?" she said. "Let me check ..." Phieas said. "... pliers, apple core long range laser gun, oh I should name you Surge!" "NO TIME TO EXPLAIN! REMEMBER WHAT SWEET BROWN SAID?" Ferb said. "... well Commander Shepard went Turbo, didn't he?" Phineas said, the fighting stopped and Mega Chompulon dropped his jaw. "Don't tell me that's..." Ferb said, "IT'S THE BIG FRICKIN' GUN NINE-THOUSAND, RUN FOR YOUR LIVES!" Phineas fired the BFG 9000, Mega Chompulon was his attended target. He ran and ran, until a big explosin came! Mega Chompulon was defeated. Commander Flynn came closer to the defeated Mega Chompulon, he said "Wow, and you thought this N7 team is complerely rusty!" 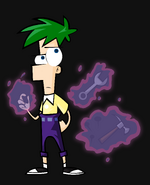 Ferb using Magnetism
Add a photo to this gallery
Retrieved from "https://pffanon.fandom.com/wiki/Mass_Effect:_Commander_Flynn%27s_Adventure?oldid=280454"
Community content is available under CC-BY-SA unless otherwise noted.