Goth is a girl living in Danville that is about Phineas and Ferb's age (maybe a little older). She cannot make up her mind on whether she likes Ferb or Eric. Her crush keeps switching from one to the other, rather than being in love with both at the same time. Most likely, she will either marry Eric or some other guy.

Goth is a tomboy. She tends to be shy at first, but when she gets to know you she won't be shy anymore. She has a short temper at times but tries to keep it under control. She is usually very kind and offers advice when she can. She also tends to be sarcastic at times.

She claims she is "not a goth chick", but seems to be part goth because of her clothing and sarcastic attitude.

Goth has short, brown hair, green eyes, and light skin. She wears a lot of black (and blue a lot of times). She also wears a fedora, but probably isn't in the O.W.C.A.

Goth and Eric have crushes on each other (except Goth's crush keeps switching from Eric to Ferb then back to Eric).

Goth has a crush on Ferb, though it keeps switching from him to Eric then back to him. Ferb shows signs of liking Goth, and actually loves her in some stories.

Goth likes to visit and assist Heinz in his schemes. However, she also helps Perry sometimes, so she isn't really on either side.

When the two first met, they found it odd that both their names coincidentally ended in "shmirtz".

Goth sometimes helps Perry defeat Doofenshmirtz, though she is usually assisting Doofenshmirtz in his schemes. She is not on either side, really.

This section is being worked on.

Ferb and Goth. Thanks, Cupcakey! 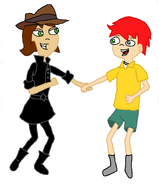 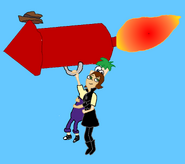 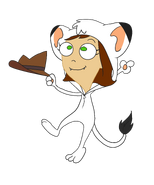 Mara in her Kimba costume in Halloween Dream. Thanks, Pastel! 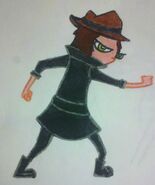 Add a photo to this gallery
Retrieved from "https://pffanon.fandom.com/wiki/Mara_%22Goth%22_Meddleshmirtz?oldid=237484"
Community content is available under CC-BY-SA unless otherwise noted.