Kiki the Fox is an everyday fox who does everyday things you would find a fox doing, but she has a secret. Much like Perry the Platypus, she's a secret agent helping defeat the evil Heinz Doofenshmirtz with her teammate Agent P on a daily bases (occasionally skipping some missions). She was created by Serina (Kiki-kat).

Unlike most foxes, Kiki can do many human traits. Like other animal agents, she has the ability to stand on her hind legs, along with a full assortment of fighting moves. She can understand and read English, as well as write it. She's right-handed, and knows how to play many musical instruments, although her favorite is unknown.

She is witty, cunning, stealthy, swift and has an keen sense of hearing like most foxes of her kind. She has an assortment of gagets, and is able to use all of them (PDA, Grappling gun, Hover Car et cetera). Due to her rather slender body, she is able to squeeze into tighter spaces but her partner, Perry the Platypus, can not. She is quick on her feet and can avoid obstacles, but is very absent-minded, so she can forget. She was born a runt, so she's tiny, around the height of a small lap, where, if she was normal, would be about the size of a mid-sized dog. When in pet mode she stands taller than Perry, but in Agent mode she's a few centimeters shorter than he is, granted her hair gives her extra height, making her seem a tad taller than Perry is. Being originated in Danville, she has a thicker coat of snow white fur in the winter season making her seem fluffier and more pudgy. She absolutely loves sweet and tender moments, romantic ones mainly.

Kiki can be very brave, kind, sweet, outgoing, and cute, but don't let that fool you because she can also be quick tempered and fierce. She mainly uses her happy-go-lucky side as her cover, for there's no reason for her to act like a mindless animal.

In Agent Mode, she tends to stay very happy when Heinz Doofenshmirtz is not around and she's alone with Perry the Platypus, although she can be enlightened when Doof's plans ultimately fail from something so obvious such as a self-destruct button installed and/or plugged in. 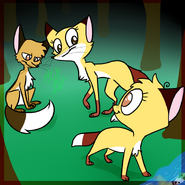 In a fanart, Serina drew a picture of Kiki's parents. They are left unknown, and info on them is very rare, but they have apparently "went missing".

Kiki's owner and best friend. Kiki loves to be around Emily dearly and enjoys being with her.

Kiki's best friend and secret crush. She is also his teammate in the battles against Heinz Doofenshmirtz and visits his home on a daily bases, leaving not one day without being with him, and devoting everyday to hanging out with him. Since they are both animals, they understand each other, "speak" frequently to each other and roughhouse with each other all the time. Perry hasn't seemed to notice her crush but has been seen flirting back to her on some occasions. Kiki loves Perry very much and Perry is very protective of her which causes him to be a bit more fierce with Heinz Doofenshmirtz when he traps her.

Kiki is friends with Pinky, though it seems to be a more of person I met one day type of thing. They're not exactly good friends nor bad ones.

Kiki seems to enjoy Phineas' creativity and enjoys his inventions and finds it fun to help him out with some of them when she's able to. Phineas seems to care alot of her well-being and worries about her when she's missing as if she was his pet.

Kiki likes Ferb's quick wits and clam senses when the situation needs it, and for some reason, she likes to fall asleep on his head.

Candace seems to think Kiki is adorable and likes to hug and pet her alot, which comforts Kiki, but aggravates her at the same time because she doesn't like Perry to be around Kiki and doesn't seem to understand why she hangs out with him all the time, and then there's the fact that Candace doesn't treat Perry the same as she does Kiki.

Kiki likes Isabella's niceness towards her and how she protects her from several things and looks out after her. Kiki is good friends with Isabella.

Kiki has a mutual relationship with Francis even though he takes care of her the most. Kiki visits with Francis as a pet and sleeps at his house in her own little bed when she wants to. She finds this quite annoying due to the fact that he's her boss, so she doesn't come by very often.

Like Perry, Doof is Kiki's frenemy. Though sometimes Doof would rather wish her dead when her and Perry are together, because he always gets beaten up twice as hard. On the other hand, when Kiki comes on missions on her own, he's more of a friend, mainly because she doesn't see the point of having to beat him up if all she has to do is foil his plans. In turn he doesn't try to cause her much harm, but does try to stop her from foiling his plans with traps and trying to get her to leave any way possible for him to continue his plans.

Retrieved from "https://pffanon.fandom.com/wiki/Kiki_the_Fox?oldid=287946"
Community content is available under CC-BY-SA unless otherwise noted.