Phineas and Ferb Fanon
Register
Don't have an account?
Sign In
Advertisement
in: Characters, Adults, Males,
and 18 more

This page is for Jeremy Johnson from ANYBODY'S continuity!

Jeremy Johnson is a teenage boy who Candace has a crush on but secretly a highly trained odst (orbital drop shock trooper) and aid 177 and arbiter in the covenet war he's from the future. He is voiced by Mitchel Musso. He was born on August 15, 1991.

Jeremy is Dr. Jeremy Johnson (presumably ranked Lieutenant Commander) aboard the USS Phineas in Celestial Feelings. He is a minor character in If Summer Only Lasted One Day. He is also a semi-major character in An Interplexing Future (where he's 19 years old and in college with Candace being that this story is 3 years after If Summer Only Lasted One Day). It is mentioned in Love's Full Blossom that by this time (2025), he is married to Candace and that they have their first child (Amanda Johnson). He is next featured in Ad Astra 4: Sacrifice of the Angels, where he is put in charge, along with Candace, of his nephews Chris amd Erica Flynn, who still managed to run away to intervene in a massive battle involving the Phineas-A. Jeremy has remained minor in all of these stories.

Jeremy is a part of Phineas's team, his powers are super speed and teleportation.

Jeremy is a protagonist in the fanfic. He befriends the legendary Pokemon Meloetta three years after Doofenshmirtz becomes the emperor of Danville thanks to Darkrai and Zekrom.

He and his friends and family are older and the setting is in the future in this series. And he is married to Candace.

In Candace's crush Jeremy introduces Candace to his cousin Cain when the Flynn- Fletcher's go on vacation to San Antonio, Texas. Jeremy also meets some old friends he use to go to school with, he ultimently ends up "cheating" on Candace.

Phineas and Ferb's Voyage Through the Disney Universe!

In this movie, Jeremy appears as a major character and first appears in the middle of the movie. He is only mentioned in the beginning and is also mentioned about him proposing to Candace.

The Sonic the Hedgehog Game

Jeremy appear in a Mini-Game called "Jeremy's Mayhem", In the intro, Some Playable Characters add tokens to the arcade. Inside the Arcade, you can play as Jeremy, as he rescue Candace from being transform into a cockroach from a Mad Scientist.

He doesn't make an appearance until the story "I'm In Charge". His little sister Suzy has leukemia, and he is depressed about it. He also develops a crush on Candace. In the story "Isabella the Psychic", he comes to Camp Phineas for the first time. Many girls, including Stacy, Candace, Mindy, and Aliesha throw themselves at him, but he seems the most interested in the shy girl, Milly. Milly likes him as a friend. At the end of that story, Jeremy kisses Candace.

Jeremy Johnson will be Candace Flynn's boyfriend in the new series The Stacy Hirano Show. Jeremy will be a main character in this spin-off series that follows Stacy Hirano as she and her best friend Candace start their first year at Danville Community College and move into their own place. Jeremy and Candace have no idea that Stacy has recently been recruited by Carl the Intern to be a secret agent in a all teen secret agency.

Jeremy has a minor role in CF, only appearing in a flashback for SDF, refusing to listen to Candace's test in Grade 3.

Jeremy is a major character in the Grand Theft Phineas:Tri-State Area, and he is Candace's boyfriend. Jeremy owns a Sabre Turbo. His favorite radio station is Danville Rock Radio, which means he likes classic rock music.

How I imagine the episode, Canderemy...

Jeremy and his band. 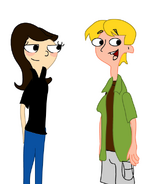 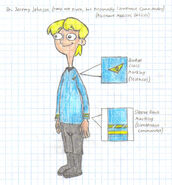 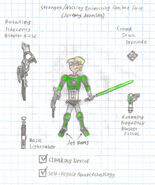 Jeremy and friends in on some action (An Interplexing Future)

Community content is available under CC-BY-SA unless otherwise noted.
Advertisement