DISCLAIMER: Cain Rangle Johnson belongs to Nan. He is not my character in any way; Izzy's Delivery Service belongs to Daisy. It is not my story in any way.

Young Candace Flynn is a responsible and beautiful girl, though she does not perceive herself as such, who runs her late father's hat shop. When on her way to the bakery to visit her sister, Sarah, she encounters by chance the mysterious wizard Jeremy, who takes a liking to her. This arouses the ire of the Witch of the Waits, who has been seeking Jeremy's heart for herself. Later that night she comes to the hat shop and curses Candace, turning her into an old woman. As the curse prevents her from telling anyone of her condition, Candace decides to run away. Along the way, she befriends a scarecrow that she nicknames Parsnip Head, and they come across Jeremy's castle. Once inside, Candace meets the fire demon Calciferb, who powers the castle and recognizes that Candace has been cursed. Calciferb offers to break the curse in exchange for Candace's help in breaking the "thing" between him and Jeremy, which keeps Calciferb prisoner in the house. Phineas, Jeremy's young apprentice, arrives to create potions and spells for Jeremy's patrons, and is surprised by Candace's presence, but doesn't try to throw her out. She later offers to cook breakfast for him, and he is surprised when she's able to get Calciferb to cook for her, something he normally only does for Jeremy. When Jeremy appears, Candace announces that she is the castle's new cleaning lady, hired by Calciferb. As she adjusts to life in the castle, she discovers that the front door is a magic portal leading to several places.

Currently, the land Candace is living in is at war with its neighbor following the mysterious disappearance of the other realm's Crown Prince Cain, and slowly the war begins to reach the country. Jeremy receives summons from the King, who orders his various assumed identities to fight in the war. However, Jeremy fears Madame Flynn-Fletcher, the royal court's magician and his former mentor, and sends Candace as his mother to decline his participation. At the palace, Candace runs into the Witch of the Waits, who had previously been expelled from the court many years ago and now seeks to regain the royal house's patronage; instead, Madame Flynn-Fletcher punishes the Witch by draining all of her power, causing her to regress into an old woman. Flynn-Fletcher tells Candace that Jeremy will meet the same fate if he does not contribute to the war. As Candace vehemently protests these measures, Suliman comes to realize the true nature of this 'mother'; Jeremy then arrives to rescue Candace, with the Witch and Flynn-Fletcher's asthmatic lapdog Pinky tagging along. He gives Candace a magical ring that will guide her to Calciferb, but Flynn-Fletcher begins tracking her to get to Jeremy.

Candace learns that Jeremy transforms into a bird-like creature to interfere in the war, but each time he transforms makes it more difficult for him to return to his human form. Jeremy shows his appreciation for her by transforming the castle so that it can lead to Candace's old home as well as his childhood residence, which he gives to Candace as a gift. Candace fears he is preparing to leave them, because he knows his remaining time as human is running out.

Soon after, Candace's mother visits the house, and somehow recognizes her despite her old appearance. They then have a happy reunion. However, Candace's mother is actually under Flynn-Fletcher's threats, and leaves behind a bag containing a "spying bug" under her orders. The former Witch of the Waits discovers it and promptly destroys the bug by tossing it into Calciferb. Unfortunately, Calciferb gets sick after eating the bug, rendering him unable to protect the castle from being discovered when Phineas opens the windows to air out the Witch's incense smoke, which smells horrible.

A few hours later, the city is carpet-bombed by enemy aircraft while Flynn-Fletcher's henchmen invade the hat shop. After protecting the hat shop from the bombing, Jeremy transforms and draws the guards away, while Candace and Calciferb bring the castle to the Waits. Candace pulls Calciferb out of the castle to destroy the magic and cut off all ties to the city, so that Jeremy would not be continually forced to defend them, then moves him back in to create a smaller version of the moving machine so they can rescue Jeremy. Unfortunately, the Witch of the Waits discovers Jeremy's heart in Calciferb's diminishing flames, and grabs it. To save her from burning, Candace douses her and Calciferb with water. The castle breaks apart, and Candace and Pinky are thrown over a cliff.

Candace starts to cry, believing that she has killed both Calciferb and Jeremy, as their lives are interconnected. As she is sobbing, Jeremy's ring points to the remains of his castle door, but Candace doesn't see it until Pinky alerts her; she walks through it, with Pinky reluctantly following, and finds herself in Jeremy's past, where she sees Calciferb being caught by a young Jeremy as a falling star. Jeremy stares at the glowing star in his hands, until he finally decides to swallow it. The result is that he coughs up the demon Calciferb, with Jeremy's own heart trapped inside the small firey spirit. Candace is pulled back into present time, but before leaving, she yells to Jeremy and Calciferb that she knows how to help them, and they should find her in the future. They watch in surprise as the strange girl is swallowed up by the ground, with a little dog following her. Lost in time and space, and falling to the earth, Candace is guided back to the present by Pinky, who keeps urging her to hurry, before the passageway collapses.

Back in the present, Candace finds Jeremy and realizes that he has been waiting for her all along. When they return to the others, Candace uses love to coax the Witch of the Waits to give back Jeremy's heart, which she puts back in his chest after conferring with Calciferb about it. Calciferb returns to his original form and flies away, but returns shortly out of a new-found loyalty to Candace. The remains of the castle (with everyone still inside) slide down the cliffs, and Parsnip Head is forced to almost sacrifice himself to stop the fall. Candace gives him a kiss, transforming him back into the missing Prince Cain, who had been cursed by a witch until he could receive a kiss from his true love.

By now, Candace has fully transformed back to her youthful self (with the exception of her gray hair), and Jeremy recovers, feeling the new burden of his restored heart. He soon forgets it, after seeing Candace's beautiful new hair, and Candace finally realizes that perhaps she's beautiful after all.

Though he has come to love Candace as well, Prince Cain realizes that her love is for Jeremy and leaves to put an end to the war, as does Flynn-Fletcher, who has been spying on the group, and only at the end has seen the help her spy dog Pinky has given Candace, acting on his own, probably against orders. Later, Jeremy, Candace, and the others are seen aboard a new, flying castle powered by Calciferb of his own free will, high above the war machines still flying over the land. The film ends with Phineas and Pinky playing on a grassy area of the castle, overlooked by Calciferb, with the Witch of the Waits watching from a chair like a kindly grandmother, while Jeremy and Candace share a kiss on a balcony at the head of the flying castle. 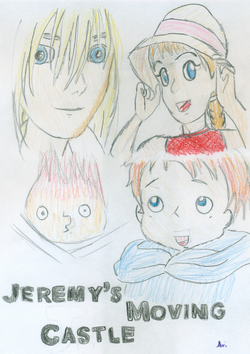 Retrieved from "https://pffanon.fandom.com/wiki/Jeremy%27s_Moving_Castle?oldid=158766"
Community content is available under CC-BY-SA unless otherwise noted.