This page is for Gretchen from Lotta Potato Salad's viewpoint

Gretchen, also known as Shrimp, Shorty or Four-eyes by Buford , is a member of the Fireside Girls and known to be very intelligent, and sometimes a show-off, saying big words to the other Fireside girls. Her mother Anna and her grandmother Wanda Acronym help in leading the OWCA, and this was meant to be kept a secret from Gretchen and her brother Andy, but Gretchen soon found out and has kept it a secret her whole life. Sometimes she helps her mother and grandmother with the OWCA, and brings supplies to the agents. She is aware that Perry and Pinky are agents.

Gretchen was born and grew up in New York City, and when her brother Andy was born her family moved to Danville. Gretchen there met and became good friends with Ginger , who introduced her to Isabella Garcia-Shapiro and helped her join the Fireside Girls .

Gretchen likes to impress her fellow Fireside girls by saying big words ("Sesquipidalian!") and is most of the time saracastic. She is completely against having crushes, which may have started because of "Feretchen".But she is also very kind, especially to animals. She is not afraid to stand up to bullies, Buford included, to defend herself and her friends. She is strong for her size, and able to pummel Buford, though it is unknown how.

She is a naturally good artist, and loves drawing cartoons. She is not very good at math, and doesn't really do very well in school because she is distracted by her art.

Gretchen has short reddish-brown hair and small blue eyes. When she is not wearing her Fireside Girl uniform, she wears a light blue shirt with a pink bow, similiar to Isabella's, and a white skirt with a pink belt.She also wears glasses.which make her eyes look bigger.

Because her mother and grandmother are heads of the OWCA, Gretchen sometimes helps by taking gadgets to the agents and chaecking for suspicious activity. On one occasion she was allowed to go on a mission to rescue the other animal agents, captured by Doofenshmirtz. Doofenshmirtz recognized her as one of the "cute little fireside girls" and Gretchen replied by zapping him with his own "Forget-about-it" inator so her cover wouldn't be blown. After discussing it with her mother he was given a main nemesis: Tanya Lamal.

Gretchen loves her brother even if he can be annoying once in a while. Gretchen loves teaching him big words and Andy loves using them. She also got him a kitten for his fifth birthday. While she calls him Domino, Andy prefers "Mr. Cat". This is the same cat in Spa day that Dr. Doofenshmirtz calls Mr. Fluffypants.

Ferb and Gretchen have had a messed-up relationship. Thanks to Irving, "half the world" ships Feretchen, the crushes between Gretchen and Ferb, which has made Gretchen vow not to stand next to or talk to Ferb, even though she doesn't mind him at all. When she first met him, however, she did have a small crush on him. "Those days are over." she said later to Ginger.

Gretchen has been friends with Julian her whole life, and when she turned thirteen, when Dash was flirting with her and trying to earn her trust, she was having trouble deciding whether she liked Julian or Dash. She ends up marrying Julian and having two children.

Gretchen has always despised Irving, for being a "stalker nerd and a creep" and also coming up with Feretchen. But Irving has a strong crush on Gretchen, despite the fact she hates him.

Of all the Fireside Girls, Gretchen is closest to Ginger. She met Ginger first, and they immediatly became best friends. Gretchen is aware of Ginger's crush on Baljeet and has even made it her personal goal to make sure Baljeet knows about it. Ginger describes Gretchen as a good friend.

Gretchen has met her sister on several occasions after Ratchet's disapearance. Gretchen, being Tanya Lamal's nemesis, arrives at least once a week to foil Tanya's evil schemes. Ratchet recongnized Gretchen as her sister but kept quiet. Gretchen just thinks of Ratchet as the "Vanessa" for Tanya and has no idea she's her sister.

Gretchen used to have a huge crush on him after he flirted with her, but she soon realizes he's Tanya Lamal's son and a jerk.

Gretchen in her uniform 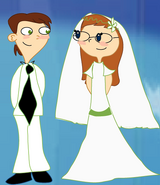 Gretchen Bennett by Gretchen ;-) (thanks!!)

Gretchen in Avatar style (thanks Angelina!!)

Gretchen singing by Cupcakey (thanks so much!)

Gretchen and Isabella by IzzyFan (thanks!!)

Gretchen in the future

Retrieved from "https://pffanon.fandom.com/wiki/Gretchen_Bennett?oldid=285659"
Community content is available under CC-BY-SA unless otherwise noted.