This page is for Gretchen (Fireside Girl) from ANYBODY'S viewpoint!
If you are looking for a full article from our canon counter part, click here.

Gretchen is a member of Fireside Girls Troop 46231.

Gretchen seems to have a fondness for Perry, as she sings to him in Oh, There You Are Perry.

She is ranked at "Ensign" and is a member of the engineering crew aboard the USS Phineas PF-01, along with the rest of the Fireside Girls.

If Summer Only Lasted One Day

She goes on adventures on the holodeck that Phineas and Ferb make, along with the rest of the Fireside Girls.

She returns as a member of the engineering/medical team aboard the USS Phineas, along with the rest of the Fireside Girls. By this time, Ferb has left Vanessa Doofenshmirtz in favor of her.

A New Star is Born

She returns as a member of the engineering/medical team aboard the USS Phineas, along with the rest of the Fireside Girls. By this time, Ferb has gone back to being with Vanessa Doofenshmirtz.

On Phineas and Isabella's wedding anniversary in 2030, she joins the crew on a brief exploration mission to Alpha Centauri B; by this time, she is the Ship Counselor aboard the USS Phineas-A and ranked at Lieutenant.

Ad Astra 4: Sacrifice of the Angels

She resumes her position as the Ship Counselor of the Phineas-A; it is revealed that S'lar had given her empathic powers some time back, which she uses in the battle with General Ch'nok's ship in the nebula to distract his tactical and helm officers so that they could successfully ram them.

Ad Astra 5: The Fight for Ferb

She resumes her role and aids in the revival of Ferb after his honorable sacrifice in Ad Astra 4. She is even made the Acting Communications Officer while Phineas, Isabella, and Buford are away on their mission for Ferb.

She arranges a Fireside Girls meeting when Adyson and Isabella are gone. Joey Perr is later revealed to have a crush on her. 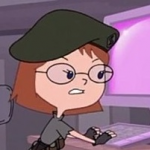 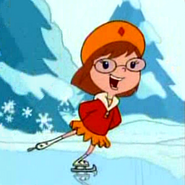 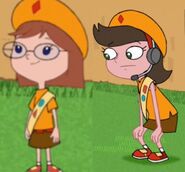 Gretchen as Turbo-Girl
Add a photo to this gallery
Retrieved from "https://pffanon.fandom.com/wiki/Gretchen_(Fireside_Girl)?oldid=314924"
Community content is available under CC-BY-SA unless otherwise noted.