Goldfish is... hard to describe. He moved to Danville after the tip of the day, so he actually knows about the aglet. He is friends with most everyone. Except for Irving. Oh, and Albert. And Stacy's not too fond of him. And... okay, not a lot of people actually like him a lot. He is an expert on useless random stuff no one else cares about, even occasionally inspiring Phineas and Ferb's big idea for the day. He is good at singing spontaneously and has a hat for every occasion, 512 to be exact. He has an uncontrollable fear of snakes, though only large ones. Ones large enough to eat him in platypus form mostly. But be honest, would you be scared of a snake that could eat you alive in one gulp? Goldfish has a Facebook account, which can be found here, and an official e-mail, goldfishd123@rocketmail.com. Goldfish is free to be used by any user for any reason. A story, a picture, whatever, as long as credit is given to AgentGoldfish, the creator. (What? What is it? Really? You want me to ask that? Ugh, fine.) Goldfish would like to request other users to draw him and add the image to a gallery at the bottom of the page.

Goldfish is close friends with Phineas and usually calls him "Phin." Either because he's too lazy to say his full name, or because he thinks it's cool. This once caused a confusion due to someone with a similar name.

Ferb and Goldfish's relationship is hard to understand due to Ferb not talking much. Ferb does occasionally correct him, and Goldfish helps him. ("The Search for Steve") Other than that, there's not much known about their relationship.

Albert dislikes Goldfish. He dislikes him a lot. Mainly due to Goldfish's habit of sneaking up on him. Even so, Albert often asks Goldfish for help. Most of the time, it's making sure his future with Stacy Hirano is undisturbed. In the future, when Albert is married to Stacy, Goldfish lives next door to them, but since the future isn't set in stone, there is the chance of it changing. Goldfish finds it fun to mess with Albert's head, and pretty much all of his body. He finds it funny to sneak up on him, read his mind, and travel to other times.

Goldfish dislikes Irving, and vice-versa. Goldfish only dislikes Irving due to being 50% stalker, 50% nerd, and 100% annoying, adding up somehow to a total of 200% Irving. Goldfish didn't check his math when he did that equation. Goldfish nicknames him SOCSN, standing for Super Obsessive Compulsive Stalker Nerd. Irving however, thinks Goldfish is stupid, annoying, and dumb.

Goldfish likes Perry. Mainly due to platypus being one of his favorite animals. Even though he has a Hydra as a pet, he finds Perry the best pet ever, even though he doesn't do much. Goldfish is one of the few humans who knows Perry's a secret agent and sometimes teams up with him, though in those cases, he doesn't do much. He just sits and watches, laughing at Doofenshmirtz's tragic backstories, breaking the epic feel of it.

Goldfish knows Vanessa well, due to teaming up with Perry then doing nothing. Goldfish may have a slight crush on her... Okay, slight is a vast understatement. Actually, vast may even be a slight understatement. Vanessa likes him as a friend, and ONLY that, while Goldfish still likes her. A lot. It's actually pretty sad.

Goldfish and "Dr. Doofy" as he calls him, don't get along too well. Goldfish finds his tragic childhood hilarious, and Doof finds Goldfish generally annoying. Not much else to say about that.

"Since when do I listen to Zo?" 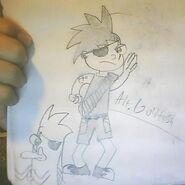 My style, but full color.

Family portrait... yeah... the other characters are not to be used by any of you!

Seen those Twix commercials? You may need a moment to read this if you have.

Goldfish as a platypus

Uncolored
Add a photo to this gallery

(Add yourself in order of fandom!)

Retrieved from "https://pffanon.fandom.com/wiki/Goldfish_Darkskull?oldid=277822"
Community content is available under CC-BY-SA unless otherwise noted.