This page is for Ginger from ANYBODY'S viewpoint!
If you are looking for a full article from our canon counter part, click here.

Ginger is a member of Fireside Girls Troop 46231. She is Stacy‘s younger sister and Dr. Hirano and Gary Hirano’s younger daughter and Bachata Hirano.

Candace and the Busted Squad

She was one of Phineas' evil assistants and guards.

Ginger is an tone-skinned asian with straight black hair with bangs, brown eyes, and her uniform has a red turtleneck collar and cuffs, and canvas shoes with a dark red line pattern. When not in her uniform, she wears an outfit similar to her uniform, but colored purple and lilac with a purple hair bow like Stacy's.

She is ranked at "Ensign" and is a member of the engineering crew aboard the USS Phineas PF-01, along with the rest of the Fireside Girls.

If Summer Only Lasted One Day

She goes on adventures on the holodeck that Phineas and Ferb make, along with the rest of the Fireside Girls.

She returns as a member of the engineering/medical team aboard the USS Phineas, along with the rest of the Fireside Girls.

A New Star is Born

She returns as a member of the engineering/medical team aboard the USS Phineas, along with the rest of the Fireside Girls. She also helps take Isabella down to sickbay after she receives burn wounds from an explosion during a space battle.

On Phineas and Isabella's wedding anniversary in 2030, she joins the crew on a brief exploration mission to Alpha Centauri B; by this time, she is the Transporter Operator aboard the USS Phineas-A and ranked at Lieutenant.

Ad Astra 5: The Fight for Ferb

She is made Acting Science Officer and Acting First Officer during the operation to revive Ferb after his death in Ad Astra 4: Sacrifice of the Angels.

The New Adventures of Phineas & Ferb

When Mark was about to shoot Baljeet, Ginger pushed him out of the way and gets shot! The doctors took her to the hospital where they tried their best to save her. Ginger tells Baljeet that it is goodbye, but Baljeet refuses to let her go, but Ginger tells Baljeet that he'll be in her heart always. After saying her last words, Ginger dies, leaving Baljeet devastated. Baljeet swears that Mark will pay for this!

Ginger as a baby

Ginger as a baby (standing)

Ginger as a baby (regular outfit with sash)

Ginger as a baby (regular outfit) 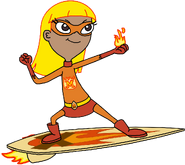 Ginger as Magma
Add a photo to this gallery
Retrieved from "https://pffanon.fandom.com/wiki/Ginger?oldid=302464"
Community content is available under CC-BY-SA unless otherwise noted.