Scubadave moved into Danvlle from New York on the day Phineas and Ferb built the giant building. He saw the Aglet Concert on TV, but he doesn't realize they performed it. It is revealed in Burnout, that his real name is Anthony Janero, and Scubadave was just a nickname.

Anthony used to live in NYC, before that, he lived in Boston. Not much is known about his life withing these two cities. Though Anthony has stated he missed NYC before. It is also known he has gone to his native country, Ecuador, multiple times. He has been banned from a certain region of Ecuador for accidently damaging the El Medio del Mundo monument with fireworks. He has taken multiple martial arts and is very skilled although he is low in official ranking. He has also gained a fear of rollercoasters.

Anthony has befriended Phineas and Ferb after they asked hin to help build the tallest building in the world. He has become Isabella's wingman by her request, although he has not been doing an efficient job recently. When he accidently discovered Perry's secret layer, he would not comply with using the memory eraser, so Major Monogram attempted to have the rest of the agents hold him down. Anthony beat all of them, with some luck, and became an agent instead. ("A New Friend from New York") He was sent to the far north to 'briefly' recieve agent training. ("Training at the O.W.C.A") He has gotten into plenty of trouble with the authorities, due to Doofenshmirtz inventions. Even in one of his hometowns. ("Return to NYC")

Anthony's personality sits on all ends of the spectrum. Anthony changes his personality in different types of situations, but there is always a trace of thrill seeking. Due to this, Anthony usually acts on impulse, not stopping to think of the consequences. In everyday situations, Anthony acts surprisingly neutral, until Phineas and Ferb come up with a new invention. Then he wants to test it out. In a dangerous situation, he would do everything he can to drop his impulsive act, but usually fails. He becomes very serious, and will stay that way until the matter is resolved. At times he will get angry, refer to the last nerve portion of the page. When he is alone, Anthony reflects on his past, and thinks about for a long time, regretting his mistakes. Later on in the series, Anthony starts becoming very serious, and the happy expression most people see on him becomes a mere mask.

He has also been shown to have a intense dislike for animals, with exception of Perry.

Anthony is about as tall as Ferb. He has brown hair, and blue eyes. He normally wears a white T-shirt with a black lightning bolt on it, faded jeans, and black and white shoes. His wardrobe changes as he grows older. On several occasions, one might find him in super-powered armor, created by Phineas and Ferb. This armor varies.

Anthony is mechanically inclined, but nowhere near as much as Phineas and Ferb.

Anthony has been shown to have unfalliable determination, and a strong will. He also has an inclination towards the objective subjects in school, and will eventually take Advanced Physics.

Anthony has a stunning lack of self-discipline, and will most likely act on impulse in trivial things. Although his will is strong, that is a limited strong will. Anthony can be easily manipulated by using the rhetoric device of pathos. He is usually hard on himself, when it comes to mistakes in the past.

Anthony has been shown to be atheletic. Although he runs at average speeds, he is strong for a boy of his size. Amthony also knows a single form of martial arts, the rest lost due to being out of practice. He will usually rely on melee to fight, as he has mediocore aim.

Anthony has a single flaw that when triggered, will disable him instantly, as long as the trigger is on.

Anthony's strength is increased immensely when he is given a super suit of armor, or something of the like. He once gained electircal powers by accident, though they also hindered his abilities at times. This condition was cured later on.

Because of an amplification of gene expression, due to one of Doofenshmirtz's inventions, Anthony gains some rather unusual traits.

Anthony's and Ferb's relation may have started a bit strained, due to the fact that Scubadave nearly hit Ferb with his drill by accident. But now Scubadave and Ferb are good friends.

They just met, not much is known at the time. But Candace may not like him due to the fact that Anthony has worked on projects with Phineas.

Anthony and Isabella met when she asked him to warn a pilot that he was going to crash with the building they were both working on at the time. Anthony knows that she has a crush on Phineas due to her saying that he was amazing then going red and leaving. Isabella has consulted him about Phineas and later asked Scubadave to become her wingman, to help her with Phineas. Anthony accepted, but he will eventually quit, as he turns out to be medioacre at the job after a while.

Anthony disliked Irving instantly after Irving showed him a lock of Ferb's hair. Anthony has decided Irving was a stalker. Even before this, Anthony felt he was a nerd. Irving has a habit of sneaking up behind him, which freaks him out.

They do not trust each other. This is due to the fact that Anthony forced himself into the agency by defeating all available agents at the time. Major Monogram suspects that Anthony his out to expose the agency and has placed Perry the Platypus to keep an eye on him. Anthony, in return, suspects this.

Has an alliance with him due to both of them being in the same agency. Perry may or may not trust him, due to Major Monogram's instructions. Anthony trusts Perry because Perry saved him from being stranded on the moon. Perry is the only animal Anthony can tolerate at the moment.

Met in Anthony meets Goldfish, they seem to be good friends, given the events in this fanfiction. Goldfish is grateful for Anthony saving him. Anthony feels grateful he met a new person. Anthony feels that Goldfish is random. As Anthony becomes more serious, he starts to see the randomness as annoying, as it is usually presented at a bad time.

Not much is known at the time.

As Anthony participates in the foiling of his plans more and more, Heinz begins to hate him as well as Perry. This somehow leads to him becoming more sinister, and finally starting to organize his plans.

Not good, due to Daisy attacking him after he had digged he and her sister out of a pile of rubble.

Not much known, execpt that he believes Didi is nicer than Daisy.

Anthony has never yet experienced his full anger. Personally, he is afraid of it, afraid it would be uncontrollable. You do not want to see it, because if you do, it is most likely that you are the one that caused it. But it takes a lot to get him there, something major, as Anthony is a level-headed boy. This rage outbreak will consist of max three full strength blows. In this state, Anthony loses most of his rationality, and becomes extremely rebellious.

(Thanks Maddyfae. :D) This is actually of Anthony's second side.

Electric Suit (The Third Side of the Fight)

Did you really think I was going to leave him in that stupid-looking track suit thing? 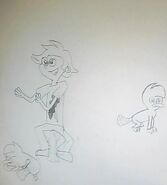 (Thanks Goldy!)
Add a photo to this gallery
Retrieved from "https://pffanon.fandom.com/wiki/Anthony_Janero?oldid=315318"
Community content is available under CC-BY-SA unless otherwise noted.