Alem Jones is a seventeen-year-old boy in The Bitterness Trilogy.

Technically, it is his alternate self who appears in the series. His regular self has not been seen yet, but he exists.

He has short, very light brown hair and blue eyes. He is about Candace's height and doesn't appear to be any stronger than the average teenager but has hidden strength.

In The Bitterness Trilogy, Phineas is led by Alem in the Resistance.

Since Phineas is still just a child, Alem tries to protect him when he can, but usually has to leave him to do missions on his own.

In a possible future extended version of The Bitterness of Phineas Flynn, Alem has to fight Phineas in order to distract him as the other kids escape. (This is during the time that Phineas is evil and terriorizing Heinz.)

Similar to Alem's friendship with Phineas.

Alem and Ferb are both doing their best to help Phineas with the problems he is facing in The Bitterness Trilogy.

Alem and Heinz are enemies. Alem is the leader of the Resistance, which is an agency working against Heinz in order to protect Danville and (hopefully) overthrow Heinz so that the Tri-State Area can be free again.

A little known fact is that Alem is Monogram's long-lost son. Very little is known about this fact at this time.

This section will be added to as The Bitterness Trilogy progresses.

Alem Jones on Lunaii. (Thanks TDR97!) 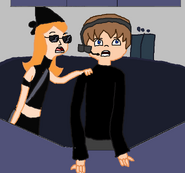 Add a photo to this gallery
Retrieved from "https://pffanon.fandom.com/wiki/Alem_Jones?oldid=286971"
Community content is available under CC-BY-SA unless otherwise noted.